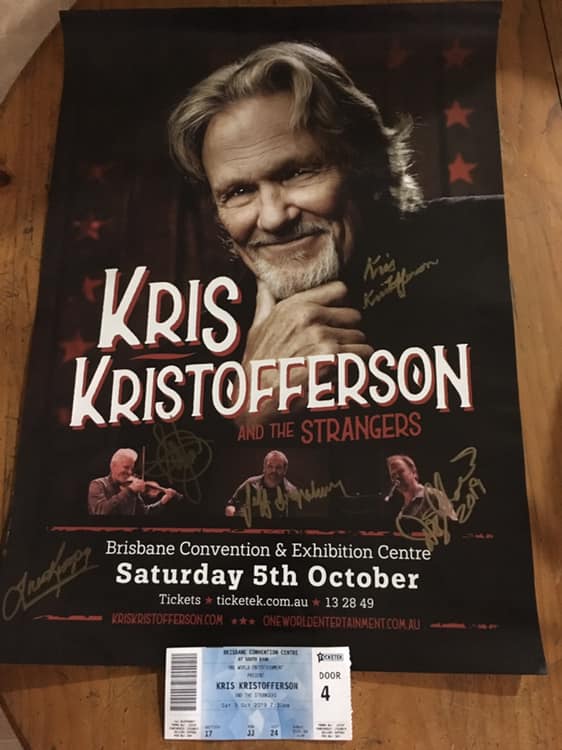 Kris and the Strangers in Brisbane 2019 is a concert with a very human review. A tale of men, mentors and just a touch of magic on Saturday, 5th October at the Brisbane Convention & Exhibition Centre.

Scotty Wilko joined us (Kris Kristofferson Appreciation Group) in May this year. At the time, he was hoping that Kris Kristofferson might tour Australia. It seemed very unlikely. Kris had been touring extensively with the Strangers and everyone figured that all of the guys might be long overdue for a break once the Euro tour ended – If it ended. The schedule and booking list just kept on growing, and the tour seemed endless, much to the delight of fans on this side of the pond.

The Australia / New Zealand tour was announced just a few weeks later. Nobody saw it coming, but Scotty’s hope had become a reality. He shared the good news with our fan group.

Howdy Everyone – I got my tickets for Kris today for Brisbane Australia. Yeah Baby. Can’t wait I hope he sings Why Me Lord. The Pilgrim chapter 33. Holy Creation etc etc
So many other great songs

Tickets to see Kris on stage are like gold dust – So fans were surprised when Scotty announced soon after that he was selling the two tickets he had recently snapped up – Great tickets, just a few rows from the front, are hard to come by. His explanation was brief – Just that he was unable to attend. He did say that he was crying as he typed the post – But we do live an emoji world. Many of us wished we lived in Australia (some considered flying out!) – We hoped the tickets would go to someone who really appreciated them.

kriskristofferson.co.uk is a participant in the Amazon Services LLC Associates Program, an affiliate advertising program designed to provide a means for sites to earn advertising fees by advertising and linking to amazon.com. We may earn a small commission for my endorsement, recommendation, testimonial, and/or link to any products or services from this website.

Just before the concert, Scotty told us his story. It went something like this.

I posted something about how I couldn’t make the Kris Kristofferson concert tonight in Brisbane a while back.
There was a bit more to this Story and I would like to share with you lovely people.
About 3 months ago I went through difficult times in my life.

I got made redundant from my job
My beautiful dog had a big 1kg tumour removed
My partner of over 10 years walked out on me for no reason, and more.

I sat looking at my TWO Kris Kristofferson tickets, thinking that there was just no way in hell that I was going to that concert by myself – I’d feed the tickets to my paper shredder before that happened. I had tried re-selling them on a number of sites, but somehow, they just never sold.

A couple of nights later, I was looking up at the stars asking the universe, why? Why me? Was I meant to go? It occurred to me that I would really have liked to be telling everyone (fellow fans) that I was about to go to the show by myself, and couldn’t wait. But …

I rang the venue. Unbelievably, there was a poster that I could have if I turned up and just collected it. It was then that I thought that somehow, my angels wanted me at that concert. I wrote the post –

Thank you, everyone, and bless you all too. I missed out on seeing the Highwaymen a long time ago for stupid reasons I’m not missing out on this.

Kristofferson and the Strangers, Brisbane

We are a group of Kris Kristofferson / Strangers fans. We share our momentoes, stories, pictures and memories with each other – often as review posts on our websites or in our group. Scotty’s feedback from the Brisbane concert is even more of a pleasure to share than usual.

Most fans have one or more favourite songs, and they enjoy a concert a lot more if these songs are on the setlist. Kris and the Strangers performed both of the songs at the top of Scotty’s wish list. He was hoping they would perform Why Me and Pilgrim 33.

Shipwrecked in the Eighties

Recordings can be tricky at gigs. We enjoy watching them, as long as capturing them doesn’t spoil the experience for either the fan or anyone else in the audience. Scotty managed to get some footage for us – Kris sounds wonderful, the band are polished but spontaneous, and the crowd is engaged and singing along. Perfect. A lovely and lively time, enjoyed by all.

Scotty – from the Venue

I am here at the Kristofferson concert – I can’t believe it
You won’t believe it. I asked for a poster and Scott Joss took it
He is going to ask Kris and all of the Strangers to sign it!
Wow 😲 how cool is that? If this message sounds all over the place it is because I’m shaking as I’m typing it.
I can’t believe it – Jesus loves me.
Thank you everyone for your kind words – I love you all.

Meet and Greet with Scott Joss

What a man and legend. I learnt a lot tonight – Scott spoke about his experiences sharing the stage with Merle Haggard – Another one of my country heroes – as a member of his band. As he spoke, it actually felt like Merle was with us.

Kris Kristofferson concerts can be a very personal experience for a fan. Kris communicates. On one level, his albums over the decades make up part of the soundtrack to a persons life – Either directly, or through a parent or a key person. On another level, Kris music talks to people when they face the most challenging of times in their loves or life – and is also a songwriter who has created songs which other artists have interpreted and made their own. A lot happens in the mind, spirit and heart of a fan at a gig while they sing along and tap their toes.

The strangers compliment Kris extremely well. They are all professional artists in their own right, collectively upholding their part of the huge legacy of Merle Haggard. There is nothing simple about “Three chords and truth”.

The concert in Brisbane was a memorable one for Scotty Wilko who provided the insight and material for this review.

The stage work exceeded expectations – So the concert itself was great (in the least overused sense of the word).

Scott Joss was incredibly kind and helpful to this one person in the crowd. Scott is known for his grace and charm as well as for his skill – but he went beyond anything that could have been expected or asked of him on Saturday night.

Kris went out of his way to provide an autograph that will be treasured for life, and this just would not have worked out so perfectly if not for Doug Colosio and Jeff Ingraham doing their bit to make sure that the prized autographed poster was produced with a full house of autographs.

I would also like to add a special thank you to the guys who do all they can to keep fans updated on how the tour is going, the sights and the trivia that means so much to your fans. Thank you for allowing us to share the little things about your lives that keep things real for us.

Great job – and thank you for going the extra mile on top of the thousands upon thousands of miles that you have already travelled taking your art and music to the fans.

I might be crying as I write this. We live in an emoji world after all – So I think that’s ok. On Saturday the 5th of October this year, you delighted thousands of fans and did the same for one individual fan, too. We think you are amazing.

One Response “Strangers in Brisbane 2019”