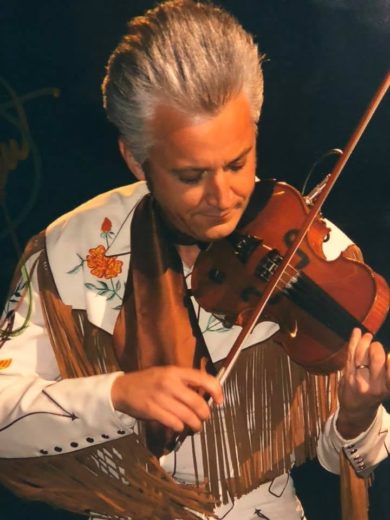 Scott Joss has been sharing the stage with Kris Kristofferson for a few years now. Doug Colosio, Jeff Ingraham (and sometimes the Haggard boys) complete the lineup.

We were thrilled to hear this news from Scott’s camp.

Scott just informed us that he was recently contacted by Jana Jae (his first fiddle teacher and Buck Owens’ first female Buckaroo!) that he is going to be inducted into the NATIONAL FIDDLER HALL OF FAME on April 18th, 2020, Kris has agreed to perform with him and it will be Scott’s night to shine! We don’t have any other details yet – and will keep everyone updated as we know more. We wanted you all to be one of the first to know.

If you want to learn more about Scott or add your congratulations, visit the group. They are a really friendly bunch and most of the members are avid Kris fans, too.

Scott has a great talent – and an equally amazing spirit. Keep your eyes open for more details.